on 28 August
The new book 35 Days In The Air - A World War II Memoir by Michael R. Carestio and Timothy D. Minneci is now available for paperback and Kindle at Amazon.com. Here's the synopsis:


From July 8th, 1944 to December 6th, 1944, U.S. Army Air Force First Lieutenant Michael R. Carestio of the 713th Squadron, 448th Fighter-Bomber Group, served as a bombardier on a B-24 Liberator crew, nicknamed "Mother Of Ten." During that time, he kept a handwritten journal documenting each of his thirty-five combat missions, which have been transcribed into this book. Author Timothy D. Minneci sat down with his great uncle Michael Carestio to discuss his experiences before, during and after the war, and share his uncle's remarkable story. 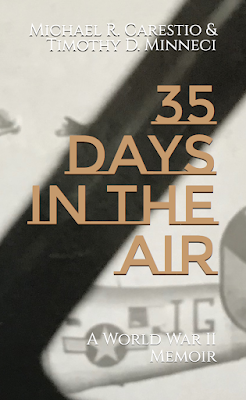