Available Today: A New Design For Living by The Stepford Five

on 02 May
Out today digitally and on CD - A New Design For Living by The Stepford Five.

Building upon the groundwork of 2003’s “6” EP, The Stepford Five’s new album “A New Design for Living” is the third full-length release from this Columbus, Ohio guitar rock staple.

Recorded, mixed and mastered at the familiar home of Workbook Studio at various times throughout 2003 with longtime producer/engineer Neal Schmitt (RJD2, The Sun, Tiara), “A New Design for Living” captures various aspects of The Stepford Five’s persona.  From the multi-layered orchestration of “Ted Hughes” and “Getaway Car” to the live-to-tape “No Use” and “Last Possibility,” the band sought to represent their live sound as well as spending time experimenting in-studio.

With the release of “A New Design for Living,” The Stepford Five plan to spend the majority of 2004 on the road supporting their first full-length release for Reverbose Records.  With a Southeastern tour already planned for the Spring, the band will return to familiar Midwestern towns and several new stops throughout the year, with a longer tour planned for the Summer/Fall. 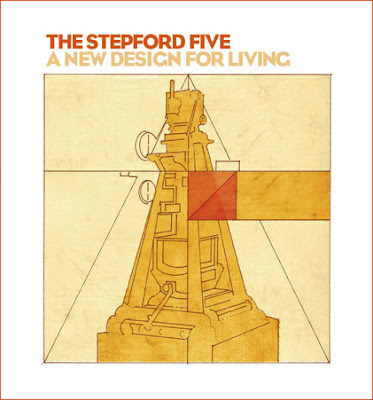