on 02 April
We've just opened the doors and already we're ready to roll. In two weeks, the first official Reverbose release will be available for purchase, a new EP by The Stepford Five. After the release of their 2001 album The Art Of Self-Defense, the band was touring relentlessly throughout 2002, but made time to write and record a batch of new tunes. The headed back to Workbook Studio and laid down three new tracks, which will join the previously released song "Fair Is Fair" from the Cringe.com/pilation vol. 2 for the 6 EP. Yes, The Stepford Five is naming their EP 6. Will album three be called 7? Who knows.

What we do know is that for this release, the band has special packaging cooked up. The EP will be released in an opaque vellum screen-printed sleeve with a wax seal. Each CD will be hand packaged by the band, and there will be a limited run of 500 copies available. Here's the full tracklisting: 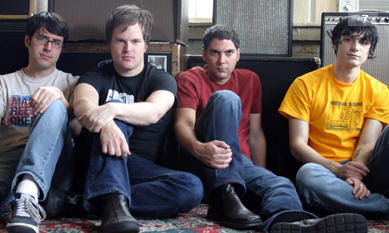